The late Sridevi’s darling daughter Jhanvi Kapoor turned 21 on the 6th of March. This day could have been a big day for the girl but with the untimely loss of her beloved mother, Jhanvi was not at all excited for her birthday.

But, the Kapoor family had different plans for her and hosted an intimate family dinner to cheer the girl a little. Jhanvi had first visited an old age home to celebrate her birthday with the people out there and had then had a quiet and intimate family dinner at step-sister Anshula’s home as it was hosted by Anshula itself.

Happy Birthday @jahnavi_kapoor She celebrated her birthday at an old age home. Its her first birthday without Sridevi Ji. God pls give her love and strength

Cousin Sonam Kapoor had later shared a picture on Instagram where all the Kapoor cousins including – Jhanvi Kapoor, Khushi Kapoor, Rhea Kapoor, Sonam, Anshula and Sanjay Kapoor’s kids. She had captioned the image saying, ” #kapooranddaughters @sanjaykapoor2500?

Little did they know that this happy picture would invite a lot of flak to them, especially Jhanvi Kapoor. The comments trolled her for celebrating her birthday given that her mother recently passed away. They read: 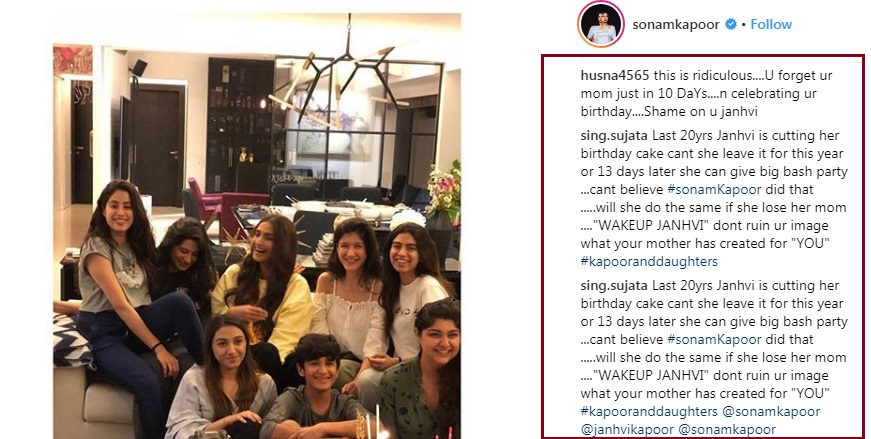 While some of the comments did talk positively about the celebration by saying that, ‘Hey guys they r also sensitive people like us… It’s just they r trying to feel janhvi kapoor happy… More than us she is in pain… If today her mother had been alive she also wanted the same na… So stop commenting… Where ever sridevi mam is she will be happy after seeing this that her daughter is Atleast trying to be happy…’ But major comments were trolling her.

What do you think about these comments? Tell us your view in the comment section below.