After days of intense speculation and denials, Indian cricket captain Virat Kohli and Bollywood star Anushka Sharma tied the knot on Monday in a private ceremony, reportedly at a countryside resort named Borgo Finocchieto — one of the most expensive holiday properties in the world, where Barack and Michelle Obama had stayed earlier this year.

“Today we have promised each other to be bound in love forever. We are truly blessed to share this wonderful news with you. This beautiful day will be made more special with the love and support of our family of fans and wellwishers. Thank you for being such an important part of our journey,” the couple, both aged 29, said in a joint statement. 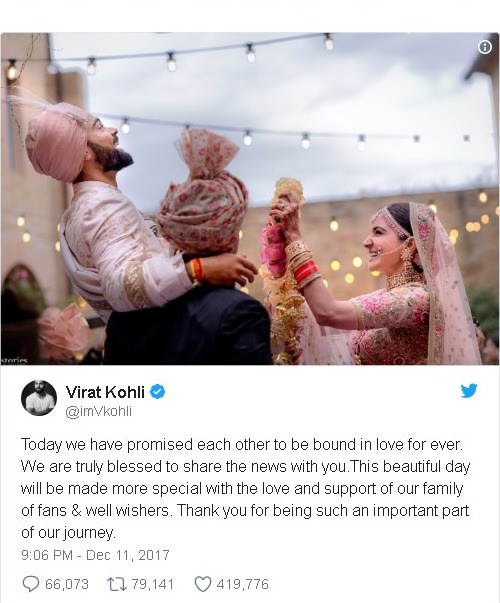 The Virat-Anushka wedding was attended only by close family and a few friends. Both bride and groom wore wedding ensembles designed by Sabyasachi Mukherjee. 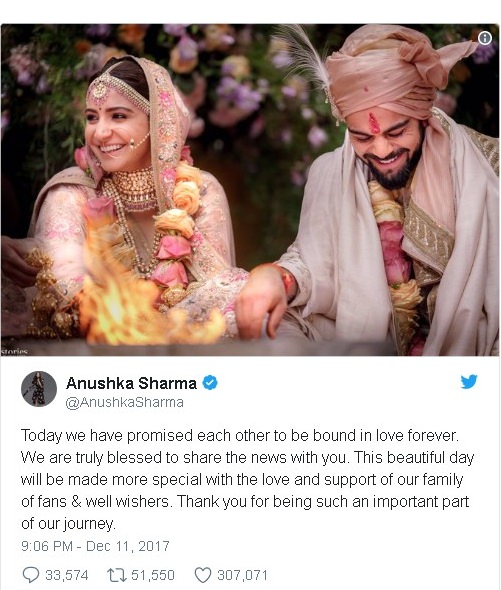 ‘Virushka’, as the couple is fondly called, will host a reception in New Delhi for their relatives on December 21, followed by a reception in Mumbai for industry friends and cricketers on December 26. They will then travel to South Africa, where the Indian cricket team will be playing a keenly anticipated series.

Anushka will spend New Year’s Eve with Virat before returning in the first week of January to shoot for a film with Shah Rukh Khan. The newly weds will shift to their new residence in Worli, Mumbai in December once they return from Delhi. 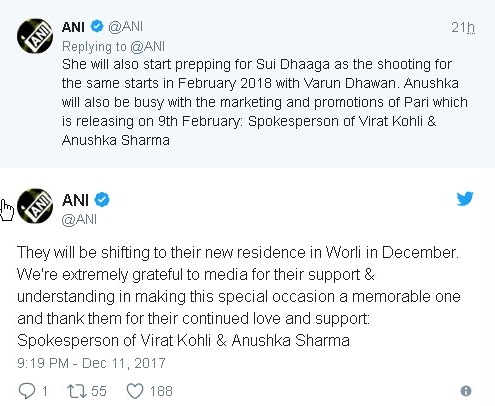 Rumours of an impending wedding had started doing the rounds after Virat opted out of the ongoing ODI and T20 series against Sri Lanka. They intensified after the couple, along with their respective families, took off for Italy early on Friday. While Anushka flew out from Mumbai, Virat left from Delhi. Anushka’s family priest, Maharaj Anant Baba, who lives in Haridwar, also accompanied the family to Europe.

Sparks first flew between the couple during the shooting of a shampoo commercial in 2013, and they had a very public falling out and reunion as their high-profile romance played out in the spotlight. Understandably, they chose to keep the wedding a quiet affair.

The dates are said to have been finalised when the couple were in Sri Lanka, in August this year, but the news was kept under wraps.

In an interview three years ago, Anushka had said that if she were to have a destination wedding, it would be in ‘somewhere like a vineyard, perhaps’. The eventual venue — a restored 13th century estate, said to charge some $150,000 (about Rs 1 crore) per week — is about an hour’s drive from the city of Tuscany in south Italy and sits right next to Italy’s wine capital, Montalcino. 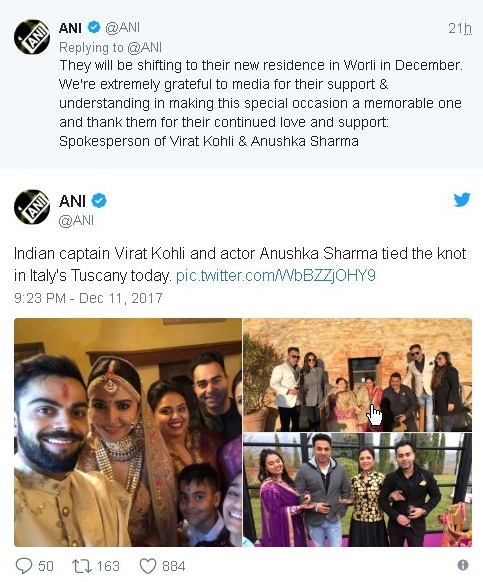 Virat tops the ICC rankings for batsmen in ODIs and T20Is and is second only to Steve Smith in Test rankings at present. He has been on a record-smashing spee in 2017 and recently became the first batsman to score six double Test centuries as a captain.

Anushka made her debut with ‘Rab Ne Bana Di Jodi’ in 2008 (Coincidentally Virat made his debut in the Indian cricket team in the same year after leading the under-19 team to victory in the junior World Cup). Anushka’s film credits include blockbusters ‘Sultan’ and ‘PK’.

Bollywood and cricket stars were quick to congratulate the couple.

“Many congratulations to @AnushkaSharma and @imVkohli on their wedding. God bless and welcome to the club!” tweeted actor Abhishek Bachchan who is married to actress and former Miss World Aishwarya Rai.

Former Pakistan captain Shahid Afridi also congratulated the couple, saying: “Congratulations @imVkohli @AnushkaSharma on your wedding. May God bless you two and give you happiness and a rewarding married life.”

“Heartiest congratulations to this lovely pair. Wishing the couple a very happy married life,” read the message on cricket board BCCI’s Twitter handle.

Pacer Umesh Yadav also tweeted: “Happy married life both of you @imVkohli and @AnushkaSharma have a wonderful life ahead may God bless u both with lots of happiness.”

‘God of cricket’ Sachin Tendulker tweeted, “Congratulations and best wishes to the just married @imVkohli and @AnushkaSharma. You both look wonderful together. #Virushka”.

Australian Pacer Brett Lee tweeted, “A big congratulations to @imVkohli & @AnushkaSharma on your special day. May it be a lifetime of laughter and happiness together.”

Pacer Ashoke Dinda tweeted, “Congratulation @imVkohli Wish you all the happiness , love and luck for the beautiful journey ahead” The most loved celebrity couple, Anushk Sharma and Virat Kohli are all set to take their relationship to the next level.

Reportedly, Anushka and Virat will be tying the holy knot in Italy between 9 to 11 December.

However, when contacted Anushka’s spokesperson, they had a different story to tell. It seems they want to keep the news under wraps till the D-day. They said that the news is completely false and is baseless. “There is absolutely no truth to it”.

While an official confirmation from the couple is awaited, close sources have confirmed that the two are headed to Milan for a vacation as Virat has taken a personal leave this month!

Also, during a recent interview when he was asked about his change in behaviour over the years, Team India’s Captain was all praises for Anushka called her his ‘lady luck’.

“Sir lady luck ka kamaal hai (I’ve got to thank the lady luck). You’ve (Gaurav) seen me, you know I had no brains before. Ever since the lady has come into my life, she’s taught me a lot of things.”

He further added, “I’ve learnt a lot, become more sensible in the last 4 years all because of her. She’s taught me how to be more patient and taught me how to utilise the position you are in to the fullest.”

So, here’s wishing the lovely couple hearty congratulations and all the very best for their new innings. Hollywood actor George Clooney is planning to sue paparazzi for taking illegal photographs of his newborn twins — Ella and Alexander — during their vacation in Italy.

A French magazine published the images of George and his wife Amal holding their children at their estate in Lake Como.

“The very first pictures of the twins in the arms of their parents. Do not miss all our exclusive photos,” the cover of the magazine read.

“Over the last week photographers from Voici magazine scaled our fence, climbed our tree and illegally took pictures of our infants inside our home. Make no mistake — the photographers, the agency and the magazine will be prosecuted to the full extent of the law,” George said in a statement.

The statement added: “The safety of our children demands it.”

In response to George’s statement, a representative for the French magazine told said: “George and Amal Clooney have been very public personalities for the last few years. Their wedding in Venice, in September 2014, was a very mediatic event; the pictures of them smiling to the public were seen all around the world. The birth of their twins, Ella and Alexander, had also been commented a lot, by themselves and their families.”

The representative added: “The images published in Voici this Friday are a response to a public demand. People love George Clooney and have been following his life story for years now. Those pictures do not put in danger Mr. Clooney, his wife or their kids.”