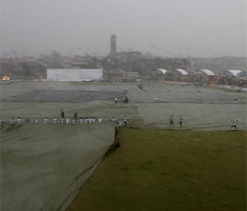 Colombo: Sri Lanka`s newly-built cricket stadiums, which are at the heart of massive financial losses incurred by the governing body, will be converted into revenue-generating ventures.

This is among other far-reaching marketing plans of the governing body for the next year.

“Transforming stadium properties into sustainable revenue generating centers is also another step towards rebuilding Sri Lanka Cricket not just as a brand but as an entity with a firm competitive advantage,” a Sri Lanka Cricket spokesman said.

However, no details were given about the plans. Sri Lanka Cricket suffered significant financial losses valued at USD 69 million after co-hosting the 2011 World Cup with India and Bangladesh.

The losses mainly stemmed from the construction of brand new stadiums at Hambantota and Pallekele and modernisation of the facilities st the Premadasa Stadium.

The SLC was forced to look for a government bail-out and consequentially the players` fees was delayed for over six months.