From being in endless controversies for its content to Central Board of Film Certification deciding to ban it in our country, Lipstick Under My Burkha has finally hit the theatres on 21st July. And boy, people have amazing things to say about Alankrita Shrivastav’s alternative narration.

With all the debate and disagreement around the film, I went to watch the film thinking there will be a lot of sex scenes, abuses, audio pornography, etc. Or the film will portray everything against our so-called culture; women will suddenly go into the revolution mode, rebel against their husbands, go out and live that ‘independent’ life. But actually there was nothing as such, so I wonder what exactly was Mr. Pahlaj Nihalani scared of. To know all about this bold and brilliant film read our review. Alankrita Shrivastava’s movie is about lives of four women living in Bhopal who have their sexual desires and needs but are scared to express it aloud because of the society we live in. Because Indian women are not supposed to be sexually active because it’s a man’s job.

Releasing a film like this wasn’t an easy task; after all Nihalani was very concerned about ‘log kya kahenge’. The film didn’t have a certification from the CBFC for a very long time but that’s not it. Here we also have a list of the scenes that were chopped off from the film in name of sanskar and sabhyata.

This list has been doing the rounds on the internet. It consists of 11 cuts made in the film and 16 cuts that the filmmakers did for CBFC’s satisfaction. 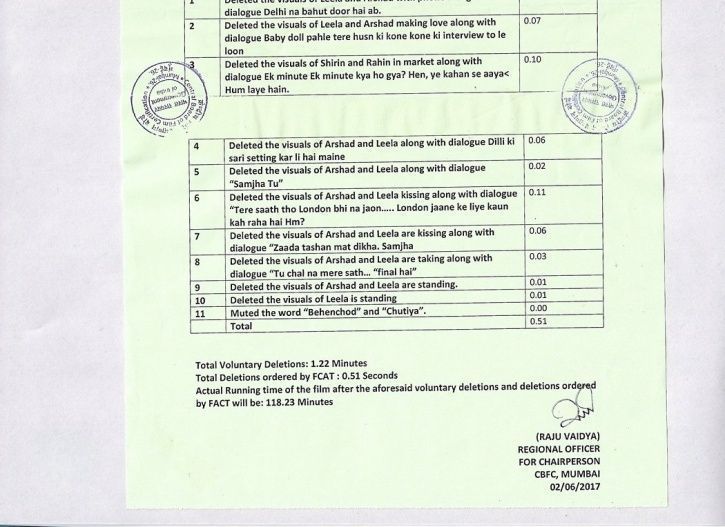 Well, well, well here’s a line from the film for all the honourable members of CBFC that we would love to get an answer from, “Lipstick maat lagao, affair ho jayega. Jeans maat pehno, scandal ho jayega. I want to ask the authorities aisa kya ho jayega? Humari azadi se aap itna daarte kyu hai?”