Key Egyptian rights groups called on Sunday for a repeat of the first round of the constitutional referendum, alleging the vote was marred by widespread violations.

Islamists who back the disputed charter claimed they were in the lead with a majority of “yes” votes.

Representatives of the seven groups charged that there was insufficient supervision by judges in Saturday’s vote in 10 of Egypt’s 27 provinces and independent monitors were prevented from witnessing vote counts.

The representatives told a news conference that they had reports of individuals falsely identifying themselves as judges, of women prevented from voting and that members of Islamist President Mohammed Morsi’s Muslim Brotherhood were allowed inside polling stations.

They also complained that some polling centers closed earlier than scheduled and that Christians were denied entry to polling stations.

“We call on the election commission to avoid these violations in the second round and repeat the first round,” said a statement by the seven groups.

Egyptians women wait in line to cast their votes outside a polling station.

“The vote counting took place in darkness,” said Negad Borai, the head of one of the groups. He alleged the election commission did not investigate thousands of complaints on alleged violations and irregularities.

The second and final round of voting on the charter is planned for Saturday, December 22.

The vote capped a near two-year struggle over Egypt’s identity since the ouster of longtime leader Hosni Mubarak.

The latest crisis over the charter evolved into a fight- deadly at times- over whether Egypt should move toward a religious state under Morsi’s Brotherhood and their ultraconservative Salafi allies, or one that retains secular traditions and an Islamic character. 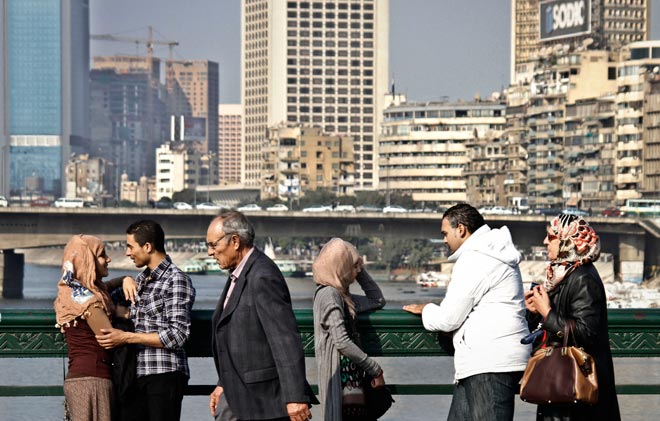 Egyptians talk as they enjoy the view of the Nile river on a bridge leading to Tahrir Square in Cairo.

Underlining the tension, some 120,000 army troops were deployed to help the police protect polling stations and state institutions after clashes between Morsi’s supporters and opponents over the past three weeks left at least 10 people dead and about 1,000 wounded.

Some voters on Saturday said the presumed supervising judge at their polling centers refused to show them official documents to certify that they were indeed a judge.

Others said some polling centers closed hours ahead of the 11 p.m. cut-off.

Others complained of suspected members of the Brotherhood whispering to voters inside polling stations to vote “yes.” And some voters alleged some of the supervising judges were influencing voters to choose “yes.”

A group of women in Alexandria claimed the judge in their polling center was stalling to stop them from voting.

The violations reported by monitors included polling centers collecting votes without judges to oversee the process, civil employees illegally replacing the judges, ballot papers not officially stamped as per regulations, campaigning inside polling stations and Christian voters being turned away. Egyptians girls show their inked fingers after casting their votes at a polling station.

The allegations of widespread violations came only hours after the Brotherhood claimed a majority of Egyptians who voted on the proposed Islamist-backed constitution have approved the document with a majority of about 57 percent.

Turnout was unofficially estimated at around 32 percent- which if confirmed would be far lower than the presidential or parliamentary elections following Mubarak’s fall.

Official results are not expected until after the second round.

The Brotherhood, which has in the past accurately predicted election results, relied on vote tallies collected by its activists at the individual polling stations across the country.

If the constitution is approved by a simple majority of voters, the Islamists empowered after the overthrow of Mubarak would gain more clout.

The upper house of parliament, dominated by Islamists, would be given the authority to legislate until a new lower house is elected.

If the draft proposal is rejected, elections would be held within three months for a new panel to write a new constitution. In the meantime, legislative powers would remain with Morsi, who won the presidency in June.

The official website of Egypt’s state television reported that 68 and 72 percent of voters cast “no” ballots in Cairo and Alexandria respectively, Egypt’s two largest cities.

The only other two provinces where the “no” vote won the majority were Gharbiyah and Daqahliya in the Nile Delta, north of Cairo.

The Brotherhood and other Islamists enjoy wide support in most of the 17 provinces voting on December 22, something that could work in favor of the “yes” vote. Egyptian women outside a polling station to cast their votes on a constitution referendum.

But the Islamists led by the Brotherhood are widely thought to have lost some of their popularity because of the perception that Morsi and the Islamist-backed government of Prime Minister Hesham Kandil have failed to resolve any of the country’s major problems such as high unemployment, rising prices and security.

Egyptians are bracing for a wide range of steep price hikes as part of the government’s program to boost revenues and restructure the economy to secure a $4.8 billion loan from the International Monetary Fund.

Last week, Egypt delayed the request for the loan after Morsi rescinded tax hikes a day after he imposed them, fearing this would only add to political turmoil.

There were no serious incidents of violence during Saturday’s vote.

And although there was no evidence of mass fraud, monitors from the opposition and rights groups said the boycott of the referendum by most judges was reflected in the chaos prevailing in some polling centers.