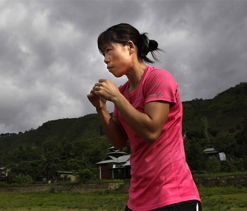 Mary Kom, who hails from Manipur, won a bronze medal at the 2012 London Olympics and was tonight named for the third highest civilian award by the Indian government.

“It`s a big achievement for North-East. The news has trickled in when IABF is going through a crisis. I`m sure more and more upcoming boxers will be motivated by this. Mary Kom once again has proved that she`s the pride of North East,” Som Bahadur Pun, who as adjudged the Best Boxer at 2002 Commonwealth Games told PTI from Shillong.

“Being a mother of two, Mary Kom has shown amazing determination to get to highest level. She is dedication personified. Getting a medal in her first ever Olympics and when the women`s boxing was introduced speaks volumes about her achievement,”Pun said.

“It`s not only an achievement but a biggest reward for our efforts to introduce women`s boxing in India way back in 2000 during the Nationals,” Asit Banerjee, IABF vice-president said.

“Mary Kom`s journey started from Kolkata when she first competed in the Open East India Championship held at the South Kolkata Physical Cultural Association in 1999. So I`m the happiest man on earth today,” he said.