‘Dunkirk’ is a kind of film which is in generally labeled as “monumental”.

Set against the backdrop of a coruscating reformation, of the 1940 evacuation, of almost 350,000 men from the beaches in Northern France, the film is a tribute to the ebb which later became a subtle insignia of pride on a national level. Hundreds of civilians arduously crossed the English Channel towards Dunkirk, on an unparalleled rescue operation. Soldiers were chauffeured back to England with fishing rafts, yachts, dinghies, while the RAF engaged the German air force overhead.

Director Christopher Nolan, who is known for creating terror through his inexhaustible imaginations taking the form of ‘Gotham City’ experiments with a new theme in the form of World War II. Nolan tried his hands on a genre that he has never worked in, and has emerged ahead of the game. He understood the fact that Dunkirk was an affair with more storylines and details than the commercial best-sellers which has made Nolan an auteur film-maker and a master of non-linear storytelling. ‘The Dark Knight’, ‘Interstellar’ and ‘Inception’ are created from a materialistic perspective and serpentine plots, yet ‘Dunkirk’ has a contrasting nature. For sure, it is a portrait of a British nation at its most woeful.

At various instances in the film, the scenes are exhilarating and perceivably red-blooded. No dialogue appears in the first fifteen minutes in the film, as the opening set is as cutthroat as the timeless sequence in ‘Saving Private Ryan’.

A troop of English soldiers roaming around a packed street in Dunkirk are set aflame, causing mass causalities, while one of them survives and succeeds in getting to the shore. At this juncture, the film widens out, to hundreds of men reaching out towards the water. The view goes as far as the human eye can see.

The soldier who survives is played by Fionn Whitehead, and meets two other soldiers including Aneurin Barnard and Harry Styles. The trio sneaks into ships and boats and make several attempts escaping from the beach. Nolan has made the actors act so well that one can easily smell the panic, courage and fear in their performances. Kenneth Branagh plays the fictional character of an on-sight representative, the highest ranking officer at Dunkirk. While, Tom Hardy and Jack Lowden play the RAF Pilots chasing Nazi aircrafts. Mark Rylance who was also seen in ‘Bridge of Spies’, plays the middle-class Mr Dawson, who leads his yatch towards the chaos, to help the people suffering. Cillian Murphy appeared shortly after, looking soggy and mortified.

The series of events in the film have been divided into three different spans of time – The turbulence at the beach, the dog-fight drama and the sequences en route to Moonstone.

Three zones of varied lengths all converging at the same end is what makes the film labyrinthine and majestic – the most indisputable and noticeable part of Nolan’s ideologies. Foxy camera-work by Hoyte van Hoytema and editing by Lee Smith together with the splendid score by Hans Zimmer makes ‘Dunkirk’ an audio-visual regale. It would not be wrong to say that the film could emerge with major Academy Awards nominations this year. 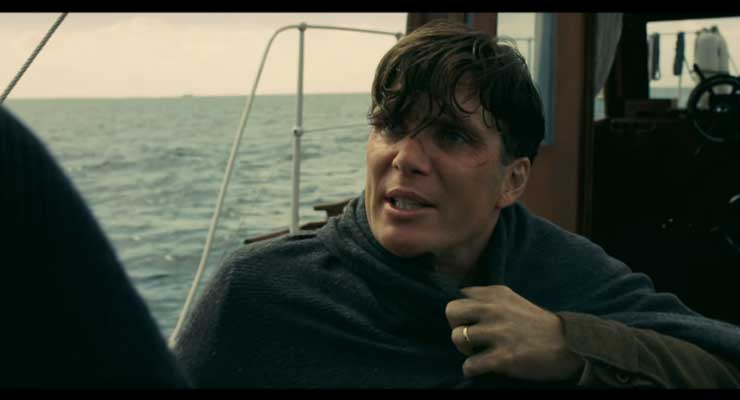 ‘Dunkirk’ can be unquestionably compared to the works of Kubrick and Spielberg, though with a dash of honest conviction, depicted in the most crucial circumstances. Christopher Nolan has yet again proved that art is not always beautiful; its essence lies in the nature of the story-telling which can be grim and heart-wrenching.