The commencement of horror in Hollywood has left viewers flabbergasted for a long time now. Since the beginning of human existence, people have been fascinated by ghosts or eerie tales. The curiosity to acquire knowledge about the presence of the unknown and feeling connected to the darker side of life has lead people to believe in ghastly energies around us.

Filmmakers have tried to tap into this primal fear since the advent of horror films. They see the horror genre as a money-making venture while still being true to what it set out to do. The audience is also attracted to mysterious plots as well. With no idea of what might be coming next and totally unpredictable climaxes, such movies can be extremely alarming while giving us incredible chills!!

Director Andy Muscheitti is finally here with ‘It’, an adaptation of one of Stephen King’s most visceral and terrifying novels. Stephen King is one of the most prolific and imaginative writers of his generation. He is undisputedly one of the best authors in the modern horror literature and when it comes to movies based on his stories – they are successful in both commercial and artistic ways. ‘It’ is the latest movie based on his book after ‘The Dark Tower’ in 2017 and ‘Cell’ in 2016, both appreciable in their own ways. Since 1976, Stephen King’s book adaptations to movies have been enthralling audiences worldwide. It’s 2017 now and the charm still hasn’t faded. The movie begins with a scene where Bill Denbrough and his seven-year-old brother Georgie are seen making a sailboat out of a sheet of paper. Georgie takes the boat out into the flooded streets and accidentally sails it down the gutter. He encounters a strange man claiming to be “Pennywise –  the Dancing Clown”. Georgie, being an innocent kid is easily charmed and devoured by the monster. The movie proceeds with the events that follow in the town, six months later. Bill, feeling guilty about sending his younger brother out alone, assembles “The Losers Club”.

This band of children, on the brink of adolescence, are the only ones who are awake and attuned to the sheer horror of town’s mysterious unexplained tragedies and child disappearances. The creature also goes after a kid in the form of a living painting, permanently traumatizing him and attacks other in the form of a rotting leper. “The Losers Club” soon realise that they have been having the same experiences. Curious, they head to the library only to find that the town Derry has been plagued by such ghastly eruptions for hundreds of years. The kids come together, some out of friendship and some out of desperation resolve to vanquish this curse and free their town from ‘It’. 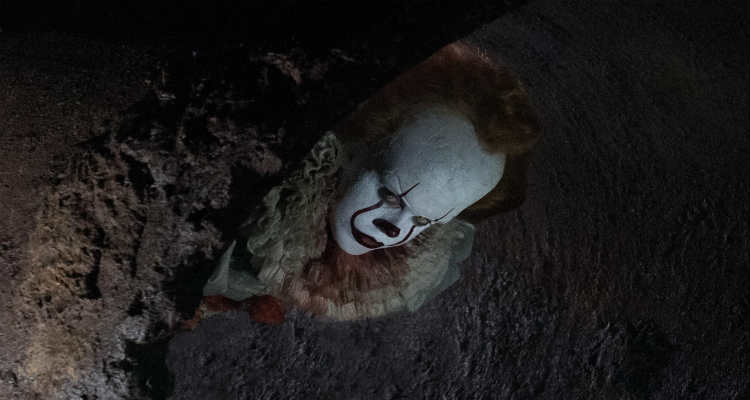 With each scene different and tingling, the film finds a proper rhythm to scare the crap out of us. Elements like – the balloons, the titular clown and “You will float too” do not make the film sadistic. The filmmakers have supposedly played the safe card in releasing the movie. ‘It’ is based upon only the childhood-set portions of King’s book. The film is expected to have a potential sequel after considering the film’s pre-release tracking numbers.

Overall, ‘It’ succeeds in making you feel the sheer terror that the kids in the film go through and sends chills down your spine. Do not watch the film alone especially if you have a fear of clowns.