We have all loved the street smart Bronn till now. The man can fight like a badass but he’s got no morals or loyalty to hold him back. The only thing he is loyal to is wealth, and understandably so. In a world where loyalty gets you beheaded and what not, perhaps the lack of it is not so bad.

But the 4th episode of ‘Game of Thrones’ changed all that. The minute Bronn ran towards Qyburn’s massive  scorpion-bow and aimed at Drogon, he lost all fans; even the diehard ones. Why would you do that, Bronn?! Guess that’s the downside of fighting for money.

Take a look at the explosive scene again:

Jerome Flynn, the actor who plays Bronn, is well aware of the lost fandom. In an interview for ‘Making Game of Thrones’, he confessed how his postman has stopped talking to him because he attempted to kill the dragon!

“I was surprised when I was watching it. I spent weeks on that sequence, but I was on the edge of my seat, the adrenaline was running — they really nailed it. Although since the day the battle aired, I’ve been a little unpopular, I have to say. My postman won’t speak to me because I shot the dragon.” 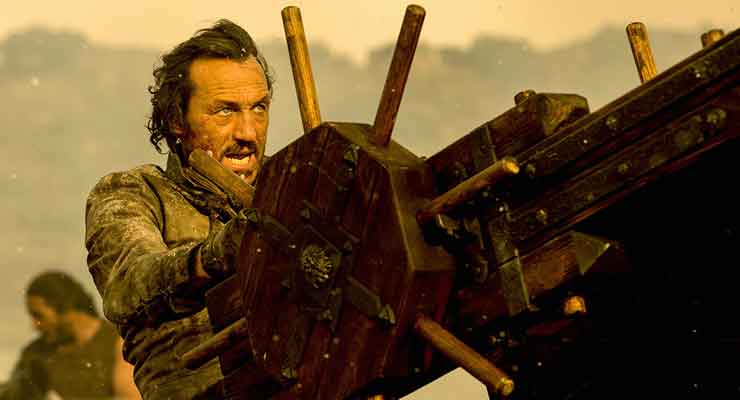 No doubt that scene was impressive as hell. Flynn himself was overwhelmed when he watched the scene again in its entirety even though he was the one in it! He further said in the interview, “It took four or five weeks to film that sequence, but the actual “death run” to Qyburn’s scorpion happened over a couple of days. And that one particular sequence was some of the most most exciting filming I’ve had.”

The visual effects in ‘Spoils of War’ were one of the best in the show so far, and we still can’t get over that image of Dany riding her dragon like a badass.

Watch how the GOT team managed to pull off this epic ‘Loot Train attack’ scene:

H/t – Making of Game Of Thrones