When it comes to horror movies, most of them never fail to frighten and entertain us, at the same time. With the onset of filming dreadful plots along with a captivating storyline, the filmmakers have used every opportunity to scare the audience. The essence of fear and what might go wrong is in itself, a thrilling experience. With a reliance on special effects and 3D sound effects, such movies can be extremely potent film forms, tapping into our dreams and invading our nightmares.

Director David Sandberg is here with his new film ‘Annabelle: Creation’, another terrifying story to the paranormal demon-hosting doll franchise. ‘Annabelle: Creation’ is the third time the doll has been on the silver screen, after a guest appearance in ‘The Conjuring’ (2013) and as the lead in ‘Annabelle’ (2014). In many ways, this film is probably the scariest of the lot. Back in 1940’s, a doll-maker and his wife, played by Anthony LaPaglia and Miranda Otto living in the demonic bungalow in the suburbs, suffers the loss of their only daughter in a tragic accident. The wife, Esther Mullins is a simpering loner and Samuel Mullins is in a bizarre state of lament. Still grieving the death of their daughter, they both decide to open up their California farmhouse as an orphanage to young girls.

The couple don’t realise that they are giving the demon exactly what it wants, more hosts! Finding the house open to the victims of its terrifying tricks, the doll starts terrorizing the youngsters using jump scares, deafening audio stabs, flickering bulbs and more supernatural events. As it is in most movies, the evil doll preys on the weak first, and this one is no different. 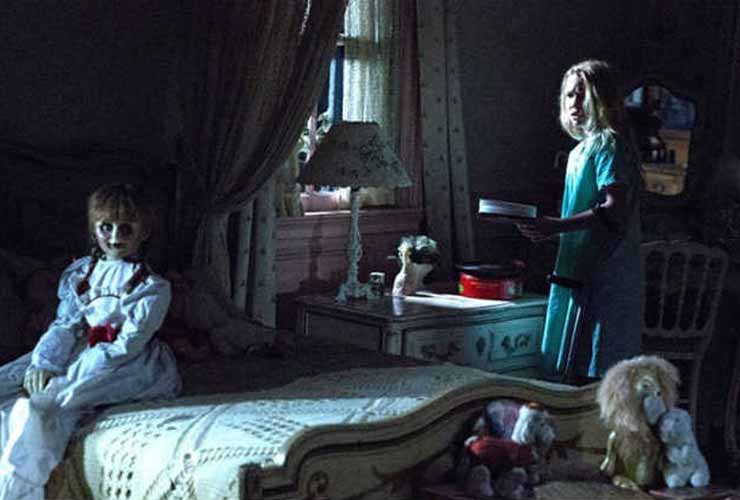 Mr. Mullins seems to be a good man but his wife is more discreet, injurious and bed-ridden. The focus falls on Janice, who finds the damned doll in an abandoned room and feels connected to the dark side. The possessed doll tries to contact her and preys on her. Before they know it, souls are being fought over and crosses are being subverted everywhere. It is revealed later in the film, the same doll was in the hands of their little daughter when she died. Her tormented spirit is hijacked by the demon who uses the same doll to get a foothold on Earth. The movie shows a trail of monstrously awful instances affecting the lives of those girls and their family.

However dark or primitive the plot may be, viewers are always attracted to the horror genre. And, for the most part, ‘Annabelle: Creation’ keeps the fear alive.