Salman Khan has been fighting the legal battle in the chinkara poaching case for years. And now the news is that his friend Aamir Khan too got dragged into a similar legal battle when a case of poaching was filed against him in 2006. Reportedly, the Gujarat High Court began the final hearing on the same on Friday.

Apparently, a petition was filed against Aamir Khan and the crew of Lagaan in 2006 in Bhuj court over the killing of a chinkara. The complainant is said to be J V Vyas, a forest official from Kutch forest range, who alleged that seven members of the unit shot the chinkara during the shoot of the film. However, Khan had moved to the High Court in 2008 against these allegations stating that they were not involved in it. He also further questioned that if the shoot was wrapped way back in 2000, then why was the complaint filed against them after six years.

The next hearing is said to be on Monday, June 30. 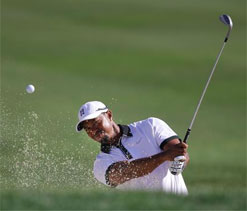 Bethesda, United States: Tiger Woods struggled to a four-over par 75 and missed the cut Friday at the National, a frustrating return from a three-month layoff as he looks ahead to July`s British Open.

It was only the 10th time Woods has missed the cut in a US PGA Tour event since he turned professional in 1996.

Woods, a 14-time major winner chasing the all-time record of 18 majors won by Jack Nicklaus, finished 36 holes at Congressional Country Club on seven-over 149 in his first competitive rounds since undergoing back surgery March 31 to relieve a pinched nerve.

He was four strokes beyond the projected cut line to the low 60 and those tied from a field of 120 at the $6.5 million event, which benefits Woods` charity foundation.

Woods had not missed the last 36 holes of a PGA event since the 2012 Greenbrier Classic, two weeks before he shared third at the British Open.

While his personal best is a PGA record of 142 events in a row without missing a cut, his run of 26 made cuts in a row that ended on Friday ranked fourth on the active list.

Woods, who has not won a major title since the 2008 US Open, had not played competitively until this week since March 9 at Doral, where he fired a 78 for his career-worst final-round score.

The 38-year-old American was trying to shake the rust off his game ahead of the British Open in three weeks at Royal Liverpool, where he won the Claret Jug in 2006.

Three weeks after that will come the year`s final major tournament, the PGA Championship at Valhalla, where Woods won the PGA crown in 2000.

Woods was inconsistent Friday, seldom able to combine solid tee shots, approaches and putts although he was strong at moments in all three areas.

He parred the first three holes after hitting into the rough, found the fairway at four but missed a seven-foot birdie putt, then needed two shots to escape a greenside bunker at the fifth, making a double bogey.

Woods had a 60-foot eagle putt at the par-5 sixth but settled for par and left a seven-foot par putt on the edge of the cup for bogey at eight.

But Woods made bogeys on the next four holes to doom any chance of reaching the weekend.

Woods hit into the trees off the tee at 11 and 12, missed the green at the par-3 13th and found greenside rough at the 14th and was unable to rescue par with his putter.

It was his longest bogey run since this year`s third round at Torrey Pines when he suffered five in a row.

Woods dropped his approach to two feet at the par-5 16th and made a birdie but missed a four-foot birdie putt at 17 and also settled for par at the last.

Woods, a winner at Congressional in 2009 and 2012, has fallen from first to fifth in the world rankings during his layoff.

New Delhi: Congress today accused Prime Minister Narendra Modi of concentrating power in his hands and said the government’s decision asking Secretaries to report to the PMO is “dilution of and disrespect to” the cabinet system.

Seeking to drive a wedge in ruling BJP, party spokesman Anand Sharma told reporters that even the Home Minister of the country cannot appoint his private secretary as government has issued orders that officials who have worked in that post in the previous regime cannot find a place in the new government.

“The decision is arbitrary, discriminatory and disrespectful to the Constitution of India”, Sharma said adding “we cannot allow coopted and politicised bureaucracy and civil servants”.

A government circular had said “it has been decided by the competent authority that any officer/official/private person who has worked earlier in the staff of a minister in any capacity for any duration may not be appointed as personal staff of ministers in the present government”.

Alleging that for the first time in India, power is being centralised in the PMO, he said now the PM will appoint the Secretaries of Ministers.

“A circular was issued that Secretaries to the government will report to the PMO. The question now arises as to what will cabinet ministers do, who under the parliamentary form of government are responisble for the work done in ministries.

The PMO has reportedly told bureaucrats that they could interact directly with the Prime Minister through the PM’s website for suggesting “changes in the sphere of governance and suggestions for reforms.”

Arjun’s Twitter handle is @arjunk26, and he made his debut on the micro-blogging platform Tuesday.

His first tweet read: “I am being tutored by @anshulakapoor as we speak on how to handle my handle.”

While Abhishek welcomed Arjun to the “chaos”, in her welcome to her “Gunday” co-star, Priyanka posted: “Ladies n gentlemen… presenting…Arjun kapoooooor! Haha Welcome @arjunk26 baba!! give some love twitter verse.”

Alia Bhatt posted: “And @arjunk26 is finally on twitter !!! C’mon c’mon give him all the love you’ve built up since forever.”

Director Kunal Kohli warned him: “@arjunk26 another one bites the dust! Before you know it you’re gonna be hooked on to twitter madness!”

Earlier Wednesday, Arjun posted: “Morning guys thank u fr all the love so far didn’t expect it…unprecedented…still grappling with the workings of this place & #instagram.”

The actor, son of film producer Boney Kapoor, already has over 41,000 followers and he himself is following 51 people, including names like Amitabh Bachchan, Anil Kapoor, Salman Khan, Priyanka, Karan Johar, Abhishek and Alia.

By IANS |Posted 1 hour ago

The team of the film, directed by Binoy Gandhi, will soon start with their second schedule, which they will be shooting abroad, said a statement.

J.P. Gene’s next is about the bond between three friends who can go to any extent to make each other happy.

Recently, rumours had it that Abhishek Chaubey has been looking out for new leads for his next and that he had signed Shahid Kapoor and Priyanka Chopra for his film. However, the director recently announced that though Shahid is on board for the film, Priyanka isn’t.

Abhishek stated that he happened to meet Shahid and had discussed the script after which an excited Shahid agreed to do the film. Moreover, it was also being said that Abhishek’s yet to be titled film will be a science fiction, however, Abhishek denied this story. The director maintained that the other details including actress and the rest of the cast is yet to be finalized.

Abhishek Chaubey however plans to finish the shoot schedule of this untitled film by the end of February 2015.

London: Hundreds of British Sikhs today held a march in central London to protest against Operation Bluestar 30 years ago.

The march from Hyde Park to Trafalgar Square involved some sloganeering and chanting.

“Thousands were killed or disappeared,” said Balvinder Kaur of the Sikh Council UK.

The military raid on the Golden Temple in Amritsar in June, 1984, was conducted to flush out Sikh militants led by Jarnail Singh Bhindranwale.

British Sikhs have also been angered by recent revelations in de-classified documents published by the UK government in January, which showed that a British SAS officer was recruited to help plan the operation.

Ranveer Singh feels that ladylove Deepika Padukone can be an all-time legend in Bollywood.

According to him, with every film of hers she is only improving. Ranveer says that there is a lot he can learn from Dippy who has also made him understand fashion terminology.

Love can make you say and do many things. Earlier when Ranveer was rumoured to be close to his Band Baaja Baaraat co-star Anushka Sharma, he had proclaimed that Anushka had taught him a lot. Looks like as a boyfriend, Ranveer is only learning from his girls.

Montreal: Nico Rosberg took pole position for Sunday`s Canadian Grand Prix with a commanding demonstration of speed as he outpaced his Mercedes team-mate Lewis Hamilton in a thrilling conclusion to Saturday`s qualifying session.

Two weeks after his controversial pole at the Monaco Grand Prix, Rosberg drove with flawless control to edge beyond his team-mate and nearest title rival by just 0.079 seconds.

The 28-year-old German secured his second successive pole, his third this year and the seventh of his career with a best lap time of one minute and 14.874 seconds to shatter the impression that the Circuit Gilles Villeneuve would see Hamilton regain supremacy over this team-mate.

It was the fourth one-two on the grid for Mercedes this year. It was Rosberg`s first pole in Montreal and came on a circuit where Hamilton had previously won three.

Germany`s defending four-time world champion Sebastian Vettel bounced back from an inconsistent weekend to grab third place in his Red Bull car ahead of Finn Valtteri Bottas and his Williams team-mate Felipe Massa of Brazil.