The finale has left us with a lot of questions. We are still digesting the information that sailed our way, making peace with a lot of things, feeling sorry for Jaime, anger for Cersei, love for Dany and Jon. Amidst all of this, you forgot one important character and one tiny bit of a scene that spoke volumes. I am talking about Tyrion’s grim expression when he witnessed Jon knocking Dany’s door. So while this went by in a blink, there is a grim secret behind it that gives way to a few theories. Ahem! Please read on. According to an old letter written by Martin to his publishers, his initial plan was to make Jon fall for his own sister Arya. The original plan also includes that an exiled Tyrion falling for Arya and giving rise to a love triangle. That angle in the sense of the show is now taking shape between Khaleesi, Jon and Tyrion. According to the books, he’s supposed to have many shades of grey after killing his father and Shae. The series was showing the opposite but maybe now that shall start reflecting. Also, if you go back in time, Tyrion did persuade Dany to let go off the two men who were in love with her, Sir Jorah and even Daario. He explains it to her that they were not the first one to love her and will not be the last one to love her. 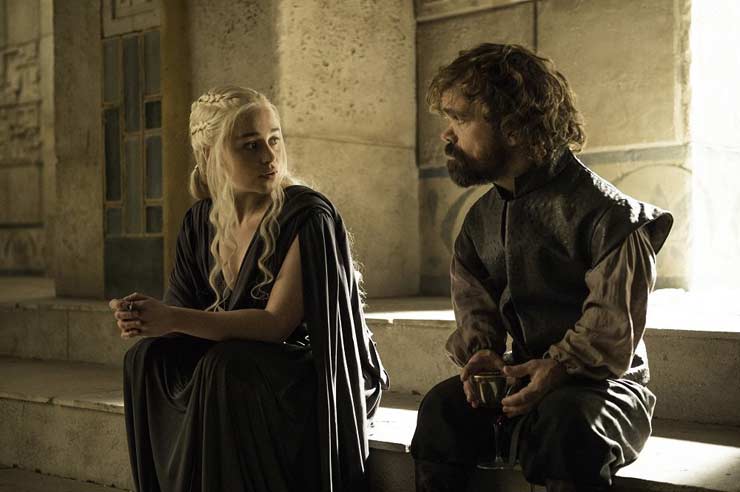 Well, this could all fall in place in the next season because our first impression of Tyrion was that he is a drunkard who takes his wine and women seriously. This new compassionate side of his kinda is getting boring. This means that a rivalry will indeed brew between him and Jon. He might even betray them. Well, interesting times ahead.