Ranveer Singh and Deepika Padukone never admitted publicly about their relationship but their actions are hard enough to prove it otherwise. The alleged rock-steady four-year relationship of theirs has apparently shaken up and the reason being their upcoming Sanjay Leela Bhansali film ‘Padmavati’. It was for one of the major promotional events of the film ‘Padmavati’s 3D trailer launch, where Deepika apparently chose to appear solo sans co-actors Ranveer and Shahid Kapoor. This event took place a few days ago, wherein the presence of the actors wasn’t mentioned to the media invited to watch the 3D trailer.

A source told DNA, “Deepika, Ranveer and Shahid Kapoor’s names were missing from the invite. In fact, the stars’ respective teams were also informed that the talent was not required for the event at all.” However, to everyone’s surprise, Deepika Padukone, who essays Rani Padmini’s character, was there in attendance. This left everyone thinking why did Ranveer and Shahid give it a miss, whereas at the same time, Ranveer was clicked playing football in a club and Shahid was also very much in the city, which raised many eyebrows.

The publication further mentioned that this action by Deepika left Ranveer fuming with anger, which resulted in a series of cryptic tweets by him. The source said, “DP (Deepika Padukone) was never supposed to attend the launch. That was what was conveyed to everyone else. But she sprung an unpleasant surprise when she chose to attend the event alone. She didn’t even bother informing her two co-actors, Shahid or Ranveer. What irritated the leading men, apparently, was the fact that neither of them had expressed unavailability. Shahid was home, while Ranveer was playing football. If they were informed in time, they would have also made it to the event.”

Ever since, the trailer launch of the film, all the three actors have been showered with praises and love for their look and performances. However, Ranveer swayed everyone the most with his performance as an antagonist in the film. The source also added, “The trailer has released and Ranveer has walked away with all the compliments. People have spoken well about Shahid, too. But there has hardly been any chatter about Deepika. Even her Ghoomar song has not helped create any intrigue or interest about her character. The film is named after Deepika’s character, so she did this only to prove a point and take centre stage, which was completely wrong on her part.”

The source further added, “Ranveer was shocked. Forget Shahid because Deepika and he are just co-stars, how could she do this to her own boyfriend? This left Ranveer fuming, who also fired the team for doing this. He and Deepika aren’t really talking anymore post this.” Well, on one side, where Shahid didn’t tweet anything about the 3D trailer, Ranveer raved about it on Twitter. Post which, his cryptic posts about ‘a bee stinging him’ were directed to his alleged girlfriend, Deepika, claimed the report. 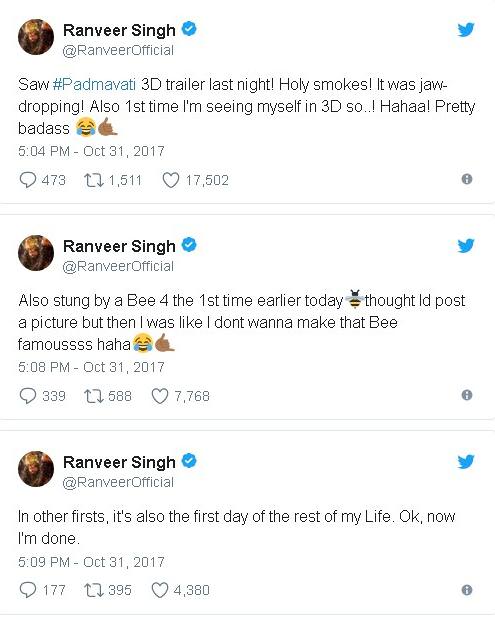