Tormund Gianstbane and the Hound, aka Sandor Clegane, are the two most badass characters on ‘Game of Thrones’. Insane fighters, total beasts on the battlefield and with absolutely zero fucks to propriety and people, they are our total favourite.

In the 6th episode, the two had a rather curious conversation about Tormund’s crush, Brienne of Tarth. Tormund’s affections for her have never been subtle, as he goes on like a teenage boy high on testosterone.

Hound’s reaction to the lady in question is perfect when he asks Tormund, “You are with Brienne of fucking Tarth?!” 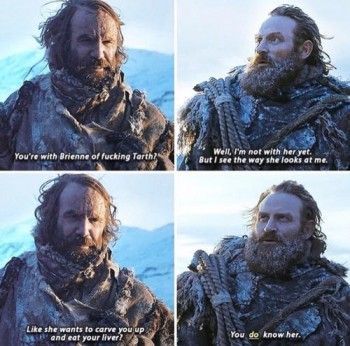 We were already rooting for Tormund and Hound to become best buds; what a crazy pair it would be. And then we saw this video of Tormund and the Hound singing a duet together. Just two big beefy guys being goofballs and singing ‘Yellow Bird’! This is the exact amount of crazy we needed before the finale.

When you’ve had to much trailer time… #behindthescenes #got7

Imagine all the crazy this duo would unleash on the very serious Jon Snow and Daenerys gang! They sure look like they need to chill a little.

A few days ago, we showed you how Kristofer Hivju, the actor who plays Tormund Gianstbane, looks without the beard, and we really thought Brienne would perhaps change her mind after looking at his clean-shaven pretty face!

Now if only Brienne would see this! This band of merry men can woo any woman with their serenading skills.