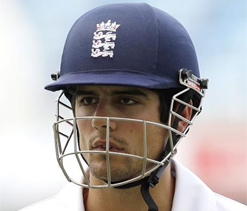 Nagpur: Skipper Alastair Cook is in line to become the first England batsman since 2003 to top the ICC Test Player Rankings, when his side takes on India in the fourth and final cricket Test starting here from Thursday.

Cook is currently ranked fourth in the table with 874 points, just five behind number-one ranked Shivnarine Chanderpaul. And although Michael Clarke is just one rating point behind Chanderpaul, Cook will have the first crack on the number-one ranking as his Test finishes a day before the Australia-Sri Lanka Test, which begins in Hobart on Friday.

With Cook having already scored 548 runs at an healthy average of 109.6 in the series so far, there is a strong possibility of him achieving the coveted number-one ranking for the first time in his career.

The last England batsman to top the batting table was former England captain Michael Vaughan who surged to the top at the conclusion of the fifth and last Ashes Test in Sydney in January 2003.

The other England batsmen to top the batting table are Graham Gooch in June 1994 and David Gower in February 1986.

Cook also has an opportunity to create history not just with his batting but also by hoping to achieve England`s first Test series win in India since 1984-85. England currently lead the four-match series 2-1.

While England is in line to create history in India, they can also retain the number two spot if they either win or draw the final Test.