Kangana Ranaut has been all over news this week for giving it back to Hrithik Roshan in her latest interviews. Like a boss, she spoke about everything. From her alleged relationship with Hrithik to the legal battle, the actress boldly sheds light on the most spoken Bollywood controversy.

Things didn’t just stop there though, as she slammed the Roshans and revealed explosive things about Hrithik, shunning all the rumours once and for all. In an interview, she went on record and said, “He runs away when he sees me. In fact, when we broke up in 2014 and after that one year when he was harassing me and stalking me, I complained to his father. I told him that his son is harassing me, stalking me, has hacked my account and he’s not letting me get into any other relationship. So his father said I’m going to arrange a meeting for you. Since then, I’m hoping to get a meeting with him to have a two-word conversation with him and ask him that he’s telling the world he doesn’t know me.”

She also said, “I’m still waiting to meet him face-to-face and exchange two words on this and sort this out, but he’s been running and hiding from me. He and his father have made fools of themselves, they should apologise to me in public. Even if they don’t, I will clarify to the world what happened to the case. The case has not died down. They couldn’t prove anything.” 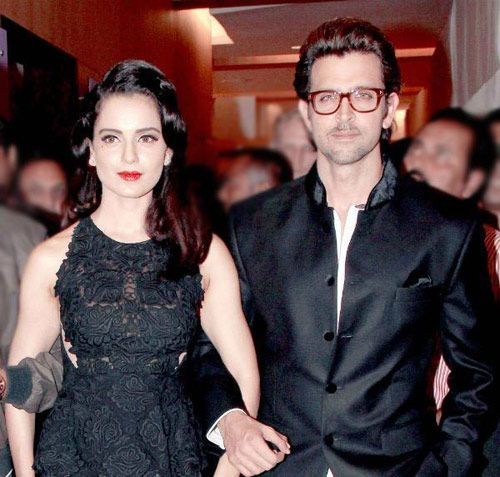 Talking about sleepless nights she said, “I have faced so much humiliation. I cried for nights. I was unable to sleep. Emails on my name were released and people still Google them and gossip. Mujhe is badtameezi ki maafi chahiye.”

Well, looking at these interviews one got to say that she is a badass woman who isn’t frightened to speak her mind. She openly slammed Hrithik and now it looks like ex-wife Sussane Khan has come to his rescue. Refuting back to Kangana, she tweeted a photo of her and him and captioned it, “The is no allegation or sad plot that can have the weight to triumph over a good soul. #powerofthetruth #mafamilia #goodoverevil.”

Truth or not? Now we just wonder what Hrithik has to say about all this. For now, all we can say is don’t mess with her, folks! Tell us what you think about Sussane’s tweet.