Last night, Shah Rukh Khan tweeted a picture with Katrina Kaif and Deepika Padukone and captioned it: “Hard day at workwaltzing with the lovely Katrina & a hug from beautiful Deepika. And they say actors have it easy !!!”

Here’s what he tweeted: 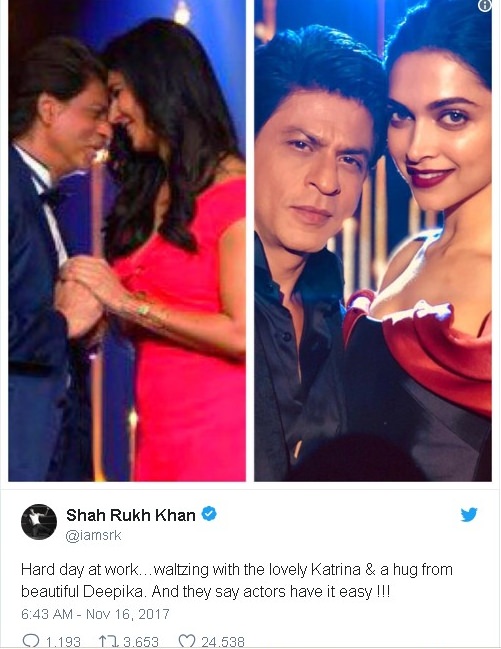 While we know that Kat is SRK’s co-star in Aanand L Rai’s untitled film but it was not sure why even Deepika was in the frame!

However, there is no official confirmation about this but, if sources are to be believed, this pic that SRK tweeted might be a shot from his film where he will be seen playing a dwarf.

Few reports also suggest that, along with other Bollywood stars like Salman Khan, Alia Bhatt, Rani Mukerji, Kajol, Sridevi and Karisma Kapoor, even Deepika will have a guest appearance in the movie.

Directed by Aanand L Rai, the film also stars Anushka Sharma in the lead role and will hit the silver screens by the end of 2018.