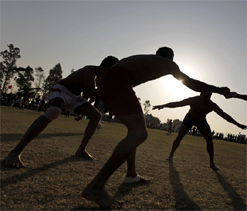 Chandigarh: A Canadian player participating in the ongoing third kabaddi World Cup here has tested positive for a banned substance.

“He has been found guilty of consuming banned drugs. It was disclosed in the report of National Anti Doping Agency (NADA) to the organising committee of the tournament,” a release from the Punjab government, the organisers of the event, said here today.

The release said that Canadian player Varinder Singh Dhanoa has been found guilty and he was banned from taking any further participation in the World Cup.

The player has also been fined, which would be deducted from the prize money of the Canadian team, the release said, adding that the teams of NADA have till date collected 88 samples from different teams.