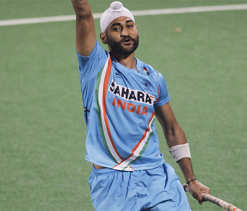 New Delhi: A visibly dejected Sandeep Singh, India`s top drag-flicker, said he was not disappointed at being sold for the base price to Mumbai Magicians as a marquee player in the Hockey India League (HIL) auction held here Sunday.

Sandeep, who was dropped from the national team after a poor run at the London Olympic Games, was bought by Mumbai outfit for his reserve price of $27,800.

Asked whether he was disappointed, Sandeep said: “Money is not everything in life. The league will be a big affair. I am looking forward to play in it.”

But it was Australian defender Joel Caroll who ensured that Sandeep gets a better pay package. Caroll was bought by Mumbai for $56,000 and as a marquee player Sandeep will be getting 15 percent more than what the Australian was sold for.

Sandeep, however, said the league will not only help the profile of the game in the country but also world hockey.