The 7th season is on and as we overdose on ‘Game of Thrones’ theories, trying to imagine every possible plot twist, we can’t help but wonder about the new words GoT has introduced. Weddings, for GoT fans, will never have the same meaning now. And winter? We have another reason to look forward to it now. Like with every epic fantasy fiction, the author has introduced a whole range of words and phrases to accommodate the many myths, houses, supernatural elements and tradition. We look at the best words ‘Game of Thrones’ has introduced to us. Which one’s your favourite? A rather grim greeting in Braavos, Valar Morghulis (in High Valyrian) translates to ‘All men must die’. It is first used by Jaqen H’ghar, the faceless assassin who helps Arya escape prison in Harrenhal. The phrase helps Arya make her journey to Braavos and to the House of Black and White, where the Faceless Men live. 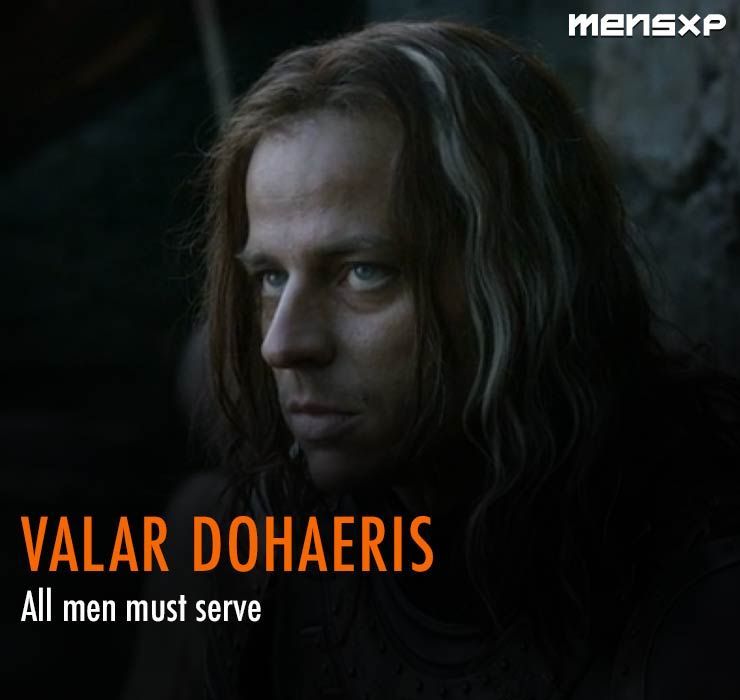 The response to Valar Morghulis, Valar Dohaeris is part of the customary greeting in Braavos. Fan theories have suggested that the phrase could refer to the fact that most of the people in Braavos are descendants of slaves who fled their masters and settled in Braavos, one of the most important of the Free Cities. 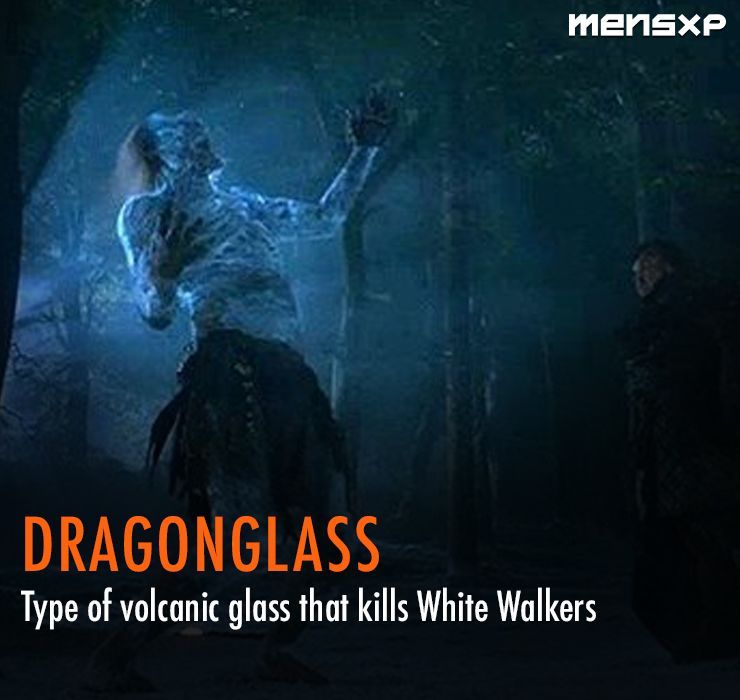 A type of volcanic glass that can kill a White Walker. Dragonglass is the only substance besides Valyrian steel that can kille the White Walkers. It is found in abundance on the island Dragonstone where Daenerys has currently set camp.

Dragonglass was used by the Children of the Forest to create the White Walkers – the magic ritual involved thrusting a dragonglass shard into a human, making him turn into a White Walker. 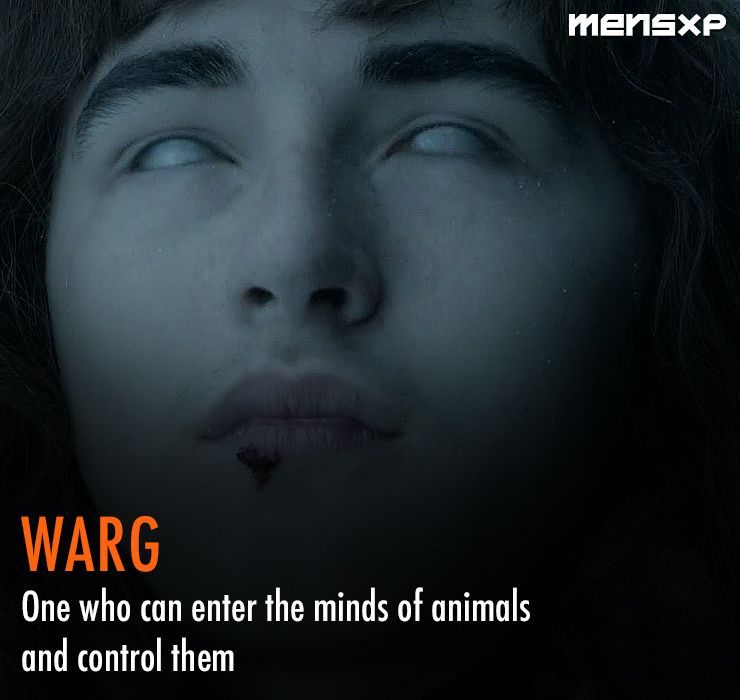 Wargs are people who can enter the mind of an animal and control it. They can also see the world through the eyes of the animal. The warg becomes numb during the act of warging. While wargs can only enter the minds of animals, an exception to it is when Bran wargs into Hodor. It is widely believed that all the Starks are wargs, but only Bran knows how to do it. Arya and Jon have been known to warg into their pet wolves, Nymeria and Ghost. 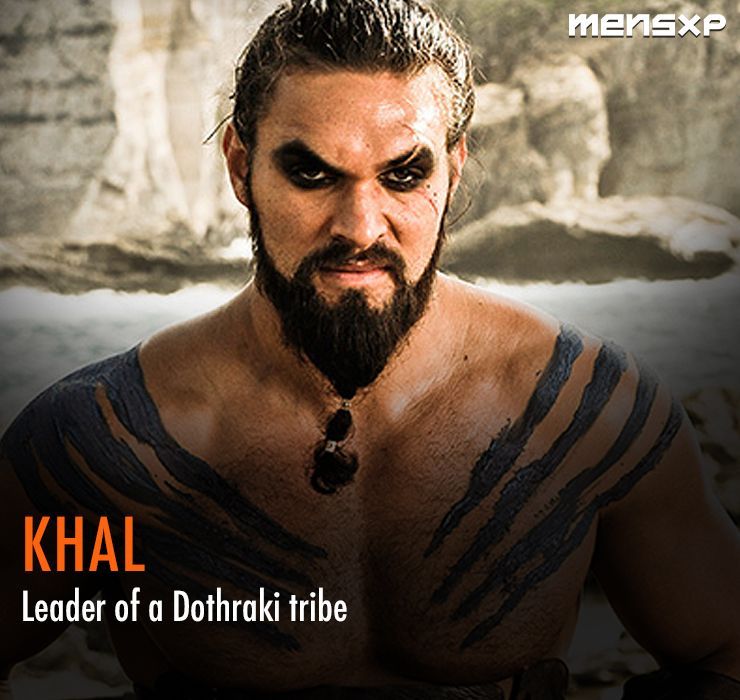 A khal is the commander/leader of a Dothraki community, khalasar. Each khalasar could easily be made of thousands of Dothraki people. A Khal is a powerful warrior who earns the title after hard-won battles and extreme display of power and ability to defeat his enemies. It is said that the Dothraki warriors don’t keep their hair long and cut it only when they are defeated in war. The longer the braid of a Dothraki warrior, the more wars he has won. Khal Drogo led a huge khalasar and had never cut his hair in his life. 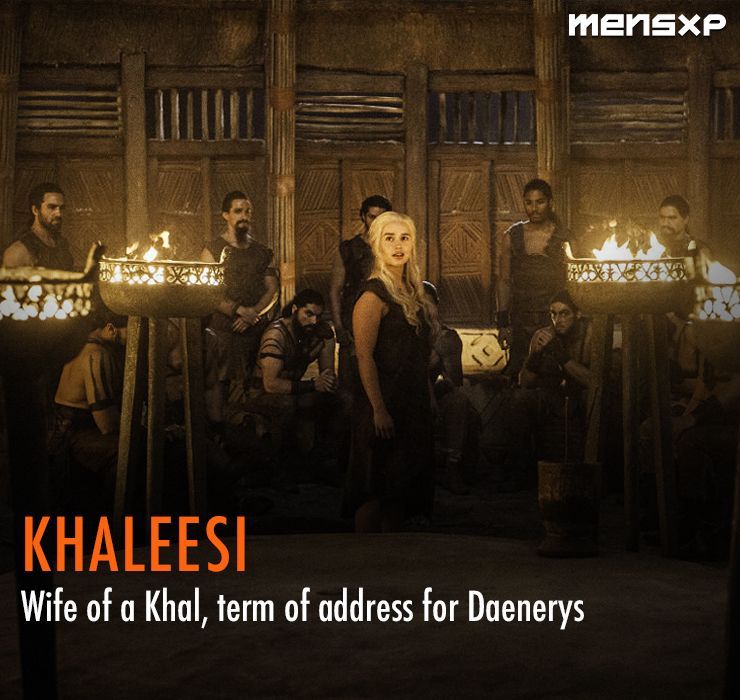 Khaleesi is the title given to the wife of a khal. When a khal dies, the tribe leaves the Khaleesi behind and she is bound to join the dosh khaleen in Vaes Dothrak. Daenerys is the only khaleesi who refused to oblige and declared herself the leader of the Dothraki men and women who chose to follow her. 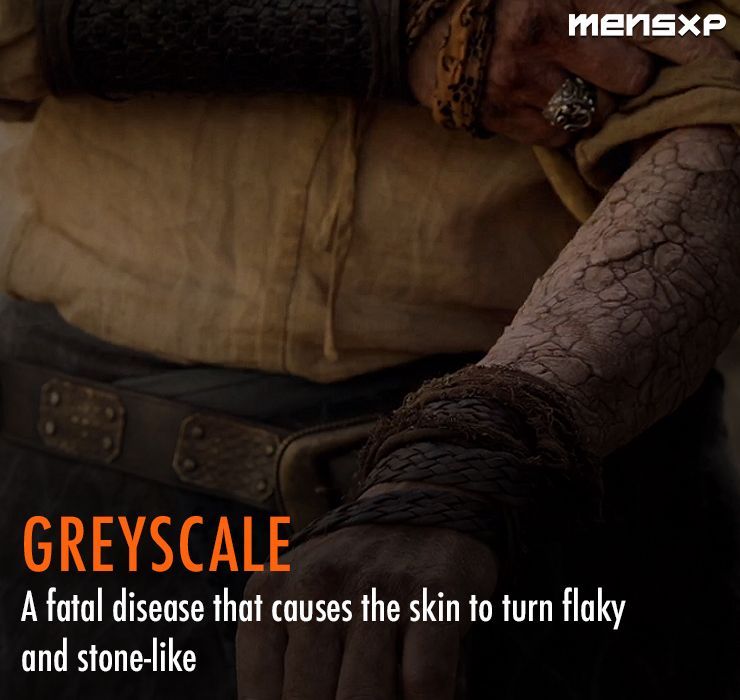 A skin disease that makes the skin scaly and dead, Greyscale is a dangerous ailment that gradually affects the entire body of an individual leading to death. Besides Jorah Mormont, Shireen (daughter of King Stannis) suffered from Greyscale. The disease was prevented from advancing but it left half of her face disfigured. The disease is extremely infectious and spread from touching which is why those suffering from it are exiled to the ruins of old cities.

Varys tells an interesting story behind the origins of the disease. Prince of the Rhoynar, Garin the Great, was defeated by the Valyrians who then rampaged his kingdom and made him watch as they went about killing his people and capturing women and children. A distressed Garin appealed to Mother Rhoyne and the city was flooded “with foul waters and a damp fog that caused the skin of the Valyrians to harden and crack, and thus was born grayscale,” as recounted by Varys. 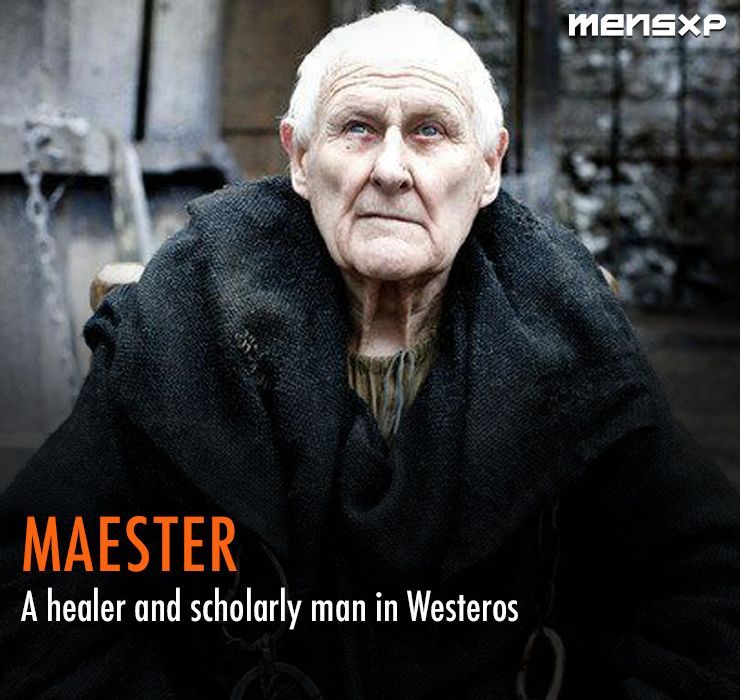 A maester is a scholarly learned man and a healer in the Seven Kingdoms. Maesters are given an order of the Sigil, a golden chain consisting of 12 links, to be worn in the neck. The heavier the chain of a maester, the more learned he is. Every House has a royal maester. The Order of the maesters is a non-religious one and the maesters often serve as advisors to their king. 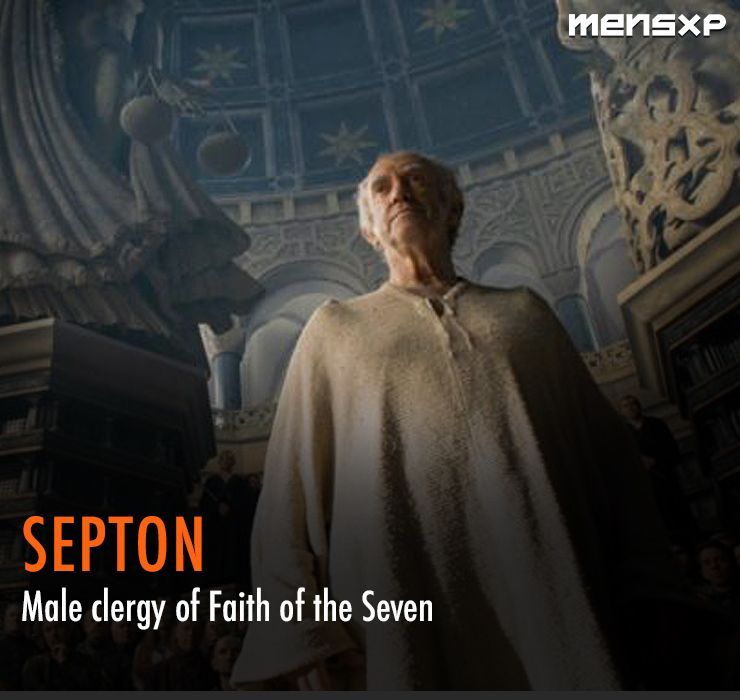 Unlike the order of the maesters, the Septon is a religious order. A septon is a male clergy member of the Faith of the Seven, the dominant religion in the Seven kingdoms. They function as priests and advocates of the religion. 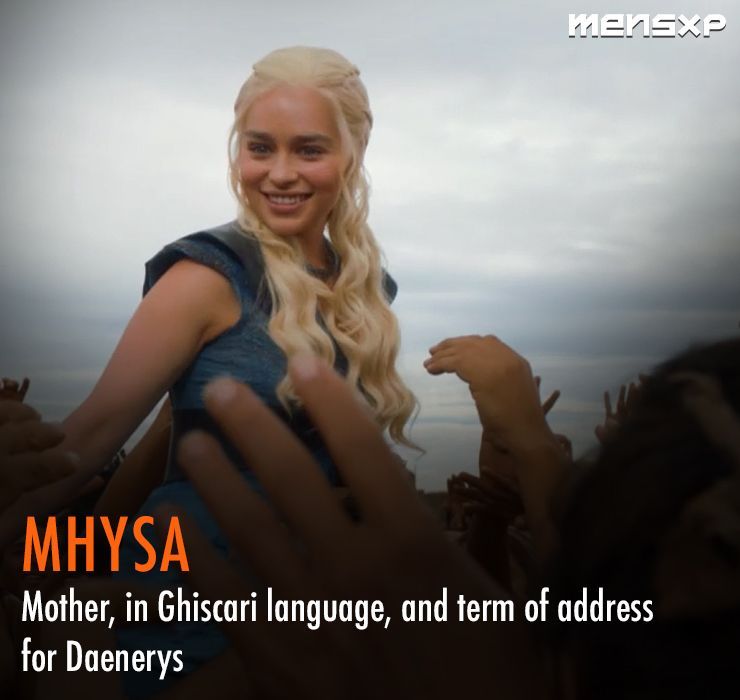 Mhysa is the name give to Daenerys when she frees the people of Yunkai from the Masters. The word means ‘mother’ in the Ghiscari language. 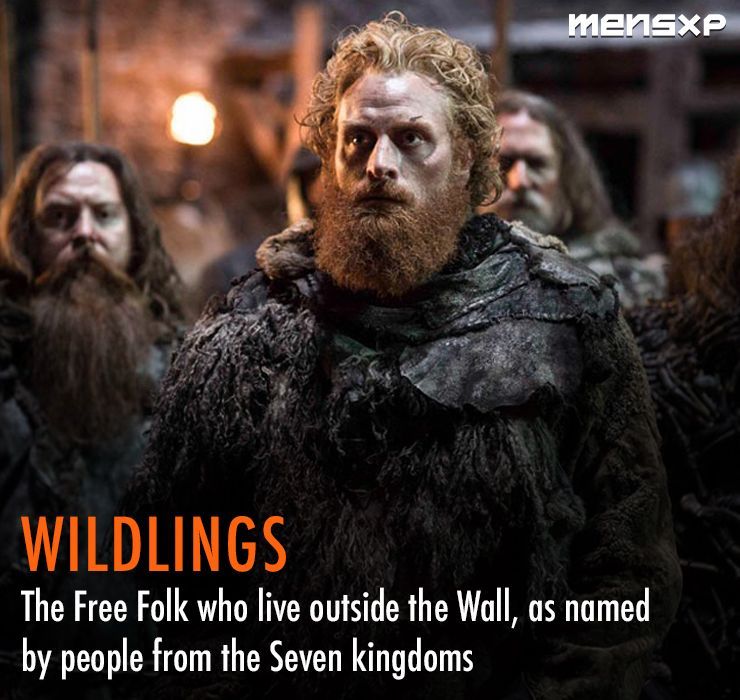 Wildlings is the name given by the people of the Seven Kingdoms to the Free Folk who live beyond the Wall. They are descendents of the First Men and are divided from the Northerners by the Wall which was originally built to protect the Seven kingdoms from White Walkers. The Free Folk don’t follow a monarchic order and choose their leader themselves. ‘Wildlings’ is a derogatory term given to them. 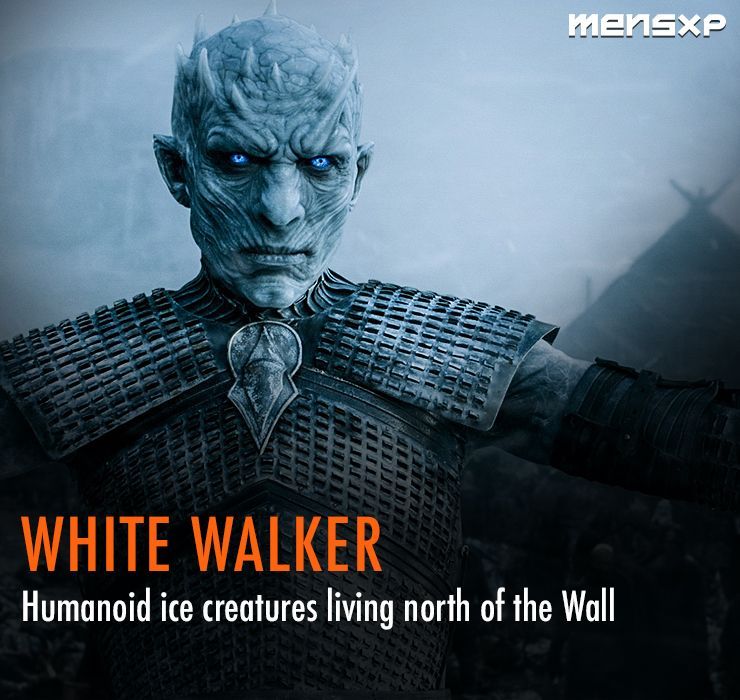 The White Walkers are the enemy behind the Wall. Snow-cold icy dead men marching across a frozen sea, killing anyone they touch. A clever synonym for zombies basically. The White Walkers were created by the Children of the Forest to protect themselves from the Andals, but soon they went rogue and the Children of the Forest could no longer control them. They can transform any dead body north of the Wall into another White Walker.